Last week I spent a few days in Nuremberg at a training course for work, but brought my running shoes with me to keep the training going. I stayed at a hotel on the outskirts of the city, so within minutes I was able to run on the numerous bicycle and farm paths connecting the fields.

On Friday I took the day off and drove back from Nuremberg after taking care of some errands. I was home by noon, and as the day was sunny and bright, decided to get in my long run. I had 32 km (20 mi) on the plan, which I accomplished in 3 hours and 32 minutes, a bit slower than planned, but not by much.

On Saturday evening I ran with my running club, we ran a new 10K course that we will be using for the annual 10K Asparagus Run that we put on at the beginning of July. Most of the club members weren’t familiar with the route, so we want to run it once or twice so we can direct the participants on race day.

In 2 ½ weeks is my next race, the Salinenlauf (Saline Run), a 12 hour event held in the town of Bad Dürkheim in Rhineland-Palatinate, Germany. Bad Dürkheim is a spa town in the Rhine-Neckar urban agglomeration (Wikipedia). The course is 693 meters long, running oblong around the Graduation tower in the center of town. 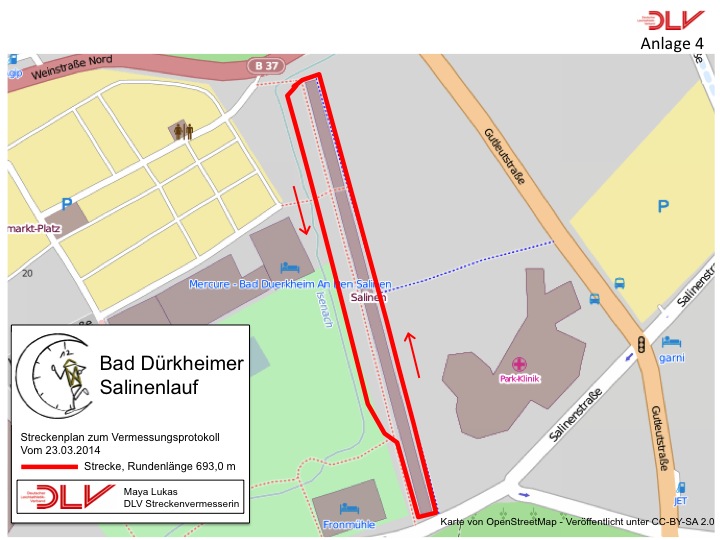 A graduation tower is a structure used in the production of salt which removes water from a saline solution by evaporation, increasing its concentration of mineral salts. Graduation towers can be found in a number of spa towns, primarily in Germany but also Poland and Austria. The mineral-rich water droplets in the air are regarded as having beneficial health effects similar to that of breathing in sea air.

I attempted this race two years ago, but around 4 ½ hours into the race a storm knocked out the power and the race was cancelled, frustrating to say the least. Strangely enough I couldn’t interest any of my running club to join me for the run, I guess the health benefits of running in the salty air are outweighed by the fear dying of boredom from running around in circles for 12 hours. But I’m going to give it my best anyway, besides it’s a good way to make new friends.